By Ruth Cooper on September 22, 2017 in Online Retailing

When an Australian sold an amplifier to a US buyer in 1999, the shopping landscape changed forever—eBay Australia was born.

In its first full year of operation in Australia, shoppers spent over one million hours on eBay, which exceeded the company’s expectations. In 2017 alone, Aussies have spent more than 239 million hours browsing, comparing and purchasing products.

Over the 18 years, sellers have listed everything from New Zealand (the country was offered in 2006 for one cent) to a fish and chip shop, which sold for $110,000, and the last Ford GTF to roll off the production line, which went for $349,000 in 2014, raising money for the National Breast Cancer Foundation

Since 1999 more than 40,000 small businesses have sold on the platform and 80 of Australia’s top 100 online retailers operate on the site today.

eBay Australia managing director Tim MacKinnon said the company has been so successful because it connects Australians to a large market, both globally and at home. 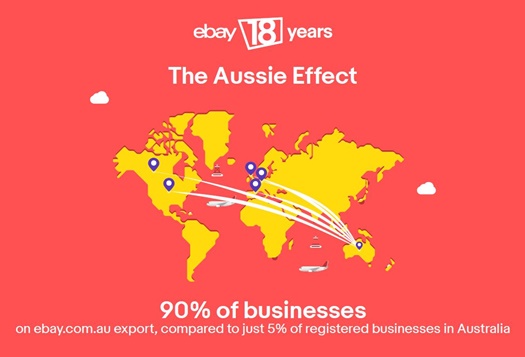 “The power of the marketplace is indisputable, offering unrivalled range and convenience,” he said. “eBay landing on Australian shores almost two decades ago meant we were no longer bound by geography.

“We could trust someone at the other side of the country or the world to send us a package we had paid for. This was a huge leap at the time, but something we now take for granted.”

eBay has also succeeded because of its investment in technology and ability to spot emerging trends like mobile shopping.

Australia has the second highest smartphone penetration per capita in the world, which is something eBay was quick to take advantage of, said MacKinnon. The marketplace has focused heavily on mobile shopping and eBay’s mobile traffic has grown from eight per cent in 2010 to 70 per cent today.

“Australia leads the way when it comes to mobile shopping,” said MacKinnon. “eBay has always been in the game of not only predicting but creating the future of shopping.

“We saw the mobile trend early and invested ahead of the curve. Our app was one of the first shopping apps in the Apple store in 2008 and remains the most downloaded shopping app in Australia today.”

After nearly two decades, Australia’s largest online marketplace will continue to look at new ways to support both shoppers and sellers. It has released a new ‘image search’ tool, which lets shoppers use pictures instead of words to search eBay’s global catalogue of 1.1 billion items.

Recognising that social media is a common way for consumer to find new products, eBay has also launched ‘find it on eBay’, which lets users share images from social sites or blogs within the eBay app to find visually similar products.