A new bottle shop has opened at Portside Wharf in Queensland and it will offer customers a unique interactive brewing experience.

But perhaps what is most exciting about this new concept is that it comes complete with an in-store brewing station where people can meet local and international brewers and watch live brewing demonstrations.

George Mellick, is not only the area manager for Star Liquor, the parent company behind Sense of Taste, but he is also a passionate home brewer and the driving force behind this unique in-store experience.

The setup includes a 30L Grainfather brewing system and they’ve also got a four-tap growler station. 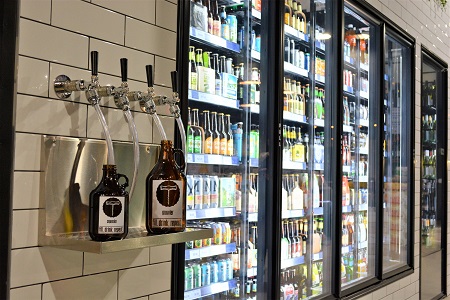 For the first live demonstration, Nick Wiseman from Grainfather and Mellick himself will be brewing an XPA. This will take place on the store’s Grand Opening party, which looks like it will be happening early August.

“We decided that we wanted to do something where we’re adding quite a few hop additions, just so people can smell the smells and see a bit of action going on, rather than just sitting around a mash,” Mellick told Beer & Brewer.

“Because the grand opening is going to go for about an hour and a half, we’re hoping to have it at that boil stage so there’s something boiling and there’s a little bit happening.”

Beyond that, Mellick says that he’s already had dialogue with some local and international brewers who are all very keen to come in for a live demonstration.

“I’m hoping that it appeals to beer lovers in general,” said Mellick. “Even just your mainstream lager drinkers can come in and be like ‘what’s going on there’ and we can be like ‘this is a brewing demo mate, we’re actually up to the mash stage here’.

“And we can take the lid off and show them the mash and they can smell those malts happening and we can explain the difference between a lager and an ale and just expand people’s knowledge on beer and get them thinking about what they’re drinking and maybe even smelling and tasting it in different ways for once instead of just drinking it out of a stubby or a can.”

In-store experiences give customers a Sense of Taste

Sense of Taste store manager Scott Christie said while the store still stocks old favourites, the idea is to give people an opportunity to learn about, and taste, some of Australia’s smaller producers and boutique varieties.

“We want to create an interactive environment that encourages customers to taste and learn about the beverages, the people who make them and the stories behind them,” he said.

“We have a permanent brewing station where people can meet a local brewer and watch a live demonstration of the end-to-end process at our monthly brewing nights, returning three weeks later to try the end product.

“There are also four taps of freshly brewed craft beer available for tasting that will be rotated regularly and can be taken home in glass bottles.”

When it comes to the growler station, this is something else that Mellick is really excited about as he has already obtained some super exclusive beers to tap.

“I’m really excited about some of the beers that we’ve got on at the growler station, they’re all small batch beers and we’ve got some really exciting stuff coming from the UK and America.

“I don’t really want to say what they are just yet because we want to do some cool things, like maybe a ‘guess the beer’ where the first 20 people that guess get a squealer of the beer.

“One of the kegs that we’ve secured, there’s only two kegs that came to Australia from the UK and I know one of them went to WA and the other is in our store. It’s exciting and I’m really looking forward to coming up with different concepts and different ways of generating some excitement,” Mellick told Beer & Brewer.

Want the latest retail news delivered straight to your inbox? Click here to sign up to the weekly retailbiz newsletter