Qantas announces plans to transition to the cloud by 2021 and talks about the company’s bid to slice single-use plastics and drastically cut down international travel times to both London and New York.

Australia’s biggest airline company is set to transition most of its infrastructure to the cloud in less than two years under new plans announced on Tuesday at the Amazon Web Services Summit in Sydney.

Rob James, Qantas’ group chief technology officer told the event that the airline giant will be moving all of its mainframes and mid-range services into the cloud by 2021.

Mr James said the move was “one of the big projects” the airline company has in the pipeline, describing it as a “pretty bold goal.”

“As a 99-year-old company sometimes I think some of our systems are too old,” he said.

“So we are trying to move most of our workload into the cloud and have a roadmap which includes having mainframes and mid range services into the cloud by 2021.” 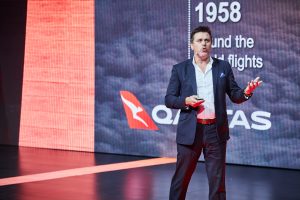 Qantas’ CEO Alan Joyce said it was these technologies which have been instrumental to the companies success as the nation’s longest running airline company – founded in 1920.

“Over the last 100 years these innovations that came nearly every last decade is what saved us,” he said.

The company’s next big technology move will focus on non-stop flights to both London and New York, he said.

“For the future of Qantas I’m thinking what’s the next big thing we need to do and over the next decade we think it is the technology which gives us the ability to fly Sydney to London non stop and Sydney to New York non-stop.”

Mr Joyce says the company will be eyeing technology which will allow them to fly Sydney to London in 17 hours and Sydney to New York in 19 hours.

Mr Joyce also spoke about the company’s bid to reduce waste after Qantas in February announced  plans to cut single-use plastic on its flights by 75 per cent.

Pointing to the company’s waste output as the equivalent of 80 747’s a year, Mr Joyce said “the right thing to do” was to cut down the amount of waste going to landfill.